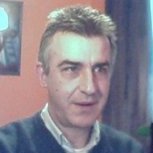 By ChrisTERiS,
August 27 in Introduce yourself